Site:
Capital One
just won't work. it tells me to try later.

it wont let me even type my inoff to log in

I've been trying to sign into to my Capital One Credit Card accounts now for the past 3 days and it keeps displaying a "System Unavailable" message every time.

This is very frustrating becaues I need to make payments to my accounts by September 3rd, and yet I can't even get them on the phone right now either, presumably because of the holiday weekend (labor day being Monday Sept 4th). When I call Capital One, there's always a pre-recorded message that tells us to log into [ capitalone.com ] to conduct any business we need to. The problem with that is the site won't let me in and has been generating a "System Unavailable" message since Thursday, August 31st.

This is beyond disconcerting that a customer is essentially locked out of their accounts for this long a period of time, even if Capital One representatives are not reachable by phone. Online access should at least work during the day for customers to be able to take care of their business.

Capital One's entire spiel hangs on the premises of 'easy online access' however, the fact remains, is that couldn't be further from the truth. Even if they're doing web-site maintenance, they should at least provide customers with another method to reach an associate with Capital One so as to facilitate the customers transaction needs.

The very least Capital One could do is to display a message on their site when customers attempt to sign, which not only tells them why their system is unavailable, but also when the system is due to be accessible again. I can't believe I'm being hindered by my own bank in this manner. This is an egregious error in judgement on Capital One's part.

I have a settlement agreement for my card accounts with Capital One, of which I setup several weeks ago. Per this agreement, I'm expected to make my first payments by September 3rd. I began attempting to log into my Capital One card accounts to make these payments on Thursday, August 31, 2017, yet when I tried to sign in on this date, I was prevented from logging into my account while being greeted with the aforementioned "System Unavailable" messge. Since August 31st, I've been trying to sign in, but continue to receive the same message. And now that it's holiday weekend, there appears not to be a live associate to speak with regarding my payments due by Sept 3rd (which is a Sunday). I can't talk to Capital One on Monday, Sept 4th either because that's the holiday, and while I would have attempted to use the automated system over the phone to try to make my payments, at present, there does not appear to be any option permitted for Capital One customers to do so.

I would have tried to make my payments before August 31st if I could have, however, I did not have the funds available until that date. It was still prior to my due date when I first attempted to make these payments, yet every attempt of mine has been prevented due to Capital One's System improprieties, as well as their insouciance of the matter.

One final note, Capital One should really change the way it handles settlement agreements with their customers, so that a due date is never generated on a [ NON-BUSINESS, NON-WORKING---NOBODY APPEARS TO BE THERE-DAY ].

It is absolutely obsurd that I ran into this problem of NON-ACCESS to my accounts prior to my settlement agreement due date. This is a major inconvenience to me, of which, now I might be penalized for by Capital One------and for what reason, other than the fact it just so happened to be a long holiday weekend for everyone in their offices. While it may be convenient for Capital One associates to close up shop during such times, it adversely effects customers access to their accounts, especially when there is such a large time-frame in which the system is unavailable for so called maintenance reasons.

Even during such instances, Capital One should have provided some means of conciliation to their customers, other than just simply telling us that we cannot access our accounts. This is not right and it flys in the face of every so-called desirable aspect of banking Capital One says it stands for, most notably, their mantra of easy 'Online Access' to ones own account.

The system should not be left to fall-off the face of the earth simply because it happens to be a long holiday weekend and apparently no one at Capital One is expected to remain to man this system, because, to say the least, it puts customers at a huge dis-advantage of having to pickup the pieces of problems much like mine aforementioned, which could've been handled more appropriately by Capital One, but unfortunately for the customer, it appears that Capital One would rather just pretend we don't exist when it comes to these types of system issues.

Furthermore, if Capital One is locking people out of their online accounts due to so called system maintenance, then what Capital One could also do in that instance, is at least provide customers with an automated telephone method of accepting payments on card accounts. The fact that Capital One does not provide that option is rather disconcerting because it has the potential to cause customers to incur major and sometimes even costly account inconveniences, much like my circumstance mentioned above. 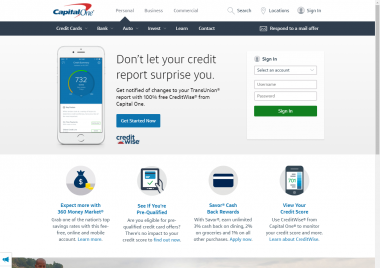 Report Capital One Down